Skip to content
I was playing Nintendo all day, so I wasn’t surprised that I’d fallen asleep. Though I could have sworn that I never left the house and if I had done, I surely would have taken my DS with me.

The first thing I am aware of is the strap, I’m strapped into a not particularly ergonomic metal chair. The sky out the window is crackling. The next thing I notice is the control panel, which looks to be way over my head. The voices in the headphones assure me that it’s simple enough. Press R for fire (possibly because R stands for red and fire is red.) A and Y: look sideways. X and B: tilt view. Arrows make the thing walk. That’s when I ask the perilous question, ‘What thing?’

My name is Jared, but these people, I think they’re friendly, they keep calling me Vallen Brice. And whenever I voice my concerns, I hear myself speaking in a woman’s voice. I am a mechanised soldier, that much is obvious. I’m sitting inside a giant armed robot and I’m supposed to save a cadet who was on  a recon mission but ended up knee deep in the smelly stuff. He’s getting nailed by enemy forces.

When I see people on the ground, they’re tiny, and I think they’re shooting at me, so I stomp on them, it’s pretty fun hearing them scream. I hope I’m dreaming, otherwise by now I’m definitely going to Hell. When I first woke up in this thing a woman was slurring my mission plan. The first time I tried to save the cadet, I was still getting used to my control panel. I ended up shooting a few of the enemy who were harassing him. I couldn’t really see, because I was quite a long way from the fight. I must have long-range guns. So I repeatedly fired on the cadet and he exploded. Friendly fire. I failed.

Anyway, I found out that I can actually fly, with what they’re calling jump jets. That makes it possible to get closer quickly and when I can do that, they’re all easy kills. Unfortunately, I can’t tell how exposed I am because this suit makes me feel invincible.

The second time I went on mission, I saved the cadet, but then the elementals killed me. They are these tiny red men with tiny guns, but their energy bursts have a lethal effect. Also, because I can only see forwards, unless I manually turn my head, I didn’t notice the tanks I’d left standing, who were shooting at me this whole time.

This is fun. I’m getting the hang of this. Though I’ve already wrecked three suits. Now that I’ve understood how to use the jump jets, I just swoop in and kill those tiny human soldiers, and now they don’t have time to shoot at me before I stand on them. 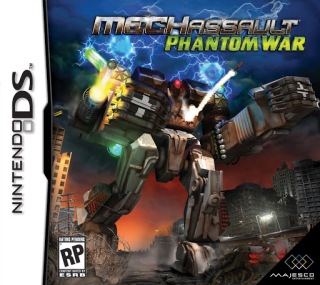